Iran has the second largest economy in the Middle East and East Africa region due to the large size of the gas and oil sector in this state. According to the World Bank, the gross domestic product (GDP) in 2015 has reached 393.7 billion US dollars, in comparison with 425.33 and 511.62 billions dollars in the years 2014 and 2013 respectively. The numbers of the International Monetary Fund points that the GDP per capita in 2015 had reached 4908 US dollars, in comparison with 6550 and 7120 in the years 2014 and 2013 respectively. It is expected that the Iranian economy will witness between the years 2016 and 2018 a growth rate of 4.5%. The international monetary fund sees that the inflation rate that Iran will face during the year 2017 will decrease to reach 7.2%, due to lifting the international sanctions on Iran after solving the Iranian nuclear file crisis, in addition to the improvement of the businesses and consumers confidence as a result of the reforms which President Hassan Rouhani had made. Even with that, the Iranian labour market is still facing structural dysfunctions as a result of sharp differences built on basis of gender, age, and geographic location.

With its enormous natural resources and a young, educated population, Iran has the potential to become an economic power, but the country’s economy faces great systemic problems, such as a lack of transparency and crucial regulations, over-regulation, and a bloated bureaucracy. A high inflation rate, unemployment, and corruption are major problems. High oil prices permitted Iran to increase its export earnings and amass over USD 68 billion in foreign-exchange reserves, but, with oil prices going below USD 40 per barrel in 2013, the Iranian government has been confronted with enormous difficulties in recent years.

The Iranian government does not usually accept foreign aid. It has been reluctant to receive aid, with the exception of humanitarian aid after the devastating earthquake in Bam, in south-eastern Iran, in 2003.

The country’s roads total about 178,151 kilometres (2007 estimate) and connect Tehran with all parts of the country and neighbouring countries. Iran’s railroads total 11,435 kilometres (2006 estimate), and the country has 316 airports (2009 estimate), including 54 major airports, of which eight international airports. Iran’s pipeline system carries natural gas, liquified petroleum gas, petroleum, and refined products. Iran’s main ports are on the Persian Gulf, at Asaluyeh, Bandar-Abbas, and Bandar-e Emam Khomeyni.

Tehran has had a metro system since 1999. Line 5, connecting Tehran to the suburb of Karaj, west of the city, was the first line to be completed. Line 1, running from north to south, and line 2 running from east to west, began operations in 2000. Lines 3 and 4 are still to be completed. On its website, the Tehran metro company features examples of a mix of traditional and modern art that can be found in the metro stations.

Position in the World Market

Countering US isolation policy, Iran has been cultivating economic cooperation with other Muslim states, regional neighbours, and alternative centres of power such as the European Union, Russia, China, and India. Iran’s main trading partners are China, India, Japan, South Korea, and Turkey. Negotiations for a Trade and Cooperation Agreement (TCA) between the EU and Iran began in 2002 but have been on hold since August 2005, after Iran resumed its nuclear activities and new US sanctions were introduced.

Since the end of the war with Iraq (in 1988) Iran has sought to improve regional relations. Iran stresses self-reliance among regional states and the exclusion of extra-regional powers (i.e., the United States). To that end, Iran has joined regional and international organizations that are not susceptible to Western domination, such as the Non-Aligned Movement, the Organization of the Islamic Conference (OIC), and the Organization of Petroleum Exporting Countries (OPEC).

Iran applied to join the World Trade Organization (WTO) in September 1996, but it was not until 2005 that WTO agreed to begin accession negotiations with Iran. Since 2005 Iran has held observer status, but the US has repeatedly blocked Iran’s admission as a full member.

In 2004 Iran Cultural Heritage and Tourism Organization (ICHTO) officials admitted that ‘Iran’s share in the world tourism revenues is a meagre 0.0001 percent’. This was the result, in large measure, of the Revolution and the subsequent war with Iraq.

The Fourth Five-Year Economic Development Plan (March 2005-2010) called for the number of foreign tourists to increase to 2.5 million annually. In 2004 some 700,000 foreign tourists visited Iran, and revenues from tourism stood at USD 500 million. The industry faces serious limitations in infrastructure, communications, regulatory norms, personnel training, and visa requirements for foreign nationals, but, during the decade 2000-2010, there was a significant increase in domestic tourism.

A selection of cultural sights in Iran

Iran’s economy is dominated by oil and gas exports, which account for more than 80 percent of export earnings in the early 2000s. The state controls the oil sector and administers several large industries. Most Iranians work in the service sector (45 percent of the workforce). Industry (31 percent) and agriculture (25 percent) also employ a significant part of Iran’s labour force. These figures are reflected in the country’s economy, with services generating 47.3 percent (2010 est.) of GDP, followed by industry at 41.7 percent and agriculture at 11 percent. According to the Iranian government, the official unemployment rate in 2011 was 11.5 percent, but other sources cite rates as high as 30 percent.

Iran’s banking system was nationalized in 1979. Private banks were not authorized to reopen until the early 2000s. The Bank-e Markazi, the Central Bank of Iran, strictly monitors all state and private banks. In 2007 approximately 364 companies were listed on the Tehran Stock Exchange. While the trading of shares was limited between 1979 and 1986, activity has increased sharply since 2002. The tourism industry was disrupted by the 1978-1979 Revolution and the Iran-Iraq War (1980-1988) but began to revive in the 1990s.

Iran’s main agricultural products are wheat, rice, other grains, sugar beets, sugar cane, fruits, nuts, cotton, dairy products, and wool. Only 12 percent of Iran’s land area is under cultivation, of which only a third is irrigated. While Iran had nearly reached self-sufficiency in the 1960s, by 1979 almost 65 percent of its food was imported.

Iran has access to the Caspian Sea in the north and the Persian Gulf and the Gulf of Oman in the south. In recent years, illegal and off-season fishing, discharge of industrial and agricultural pollutants, overfishing by other Caspian littoral states, and other unfavourable conditions have endangered Caspian fish resources. Between 1990 and 2004, Iran’s total annual Caspian Sea catch declined from 98,000 tons to 32,533 tons, including 463 tons of sturgeon, which yields high-quality caviar. Iran is the world’s largest producer and exporter of caviar. In 2009 Iran produced 10.2 tons of caviar and exported 7 tons, for export earnings of USD 22 million.

Iran has 1,786 kilometres of coastline on the Persian Gulf and the Gulf of Oman. These southern waters are rich in fish and other marine resources. In 2004 the catch off the southern coast totalled 299,000 tons. This represented an average annual increase of 12.6 percent since 1976. Increased pollution from the oil industry and other enterprises, however, poses a serious threat to this area’s fishing industry.

Large segments of the Iranian economy are opaque, ownership is often extremely difficult to ascertain, and statistics are often unreliable. In 2006 Iran ranked 105th of 163 countries on Transparency International’s Corruption Perceptions Index. In 2007 it fell to last place among the 179 countries surveyed; in 2015 it ranked 130th of 183 countries.

Much of Iran’s non-petroleum economy has, since 1979, been dominated by bonyads (foundations, semi-private charitable trusts). Bonyads are involved in all kinds of business, from pilgrim-tour organizations to pistachio nuts, from soft drinks to car factories. Bonyads control an estimated 20-30 percent of Iran’s GDP, are exempt from taxes and state control, and are criticized for being opaque and corrupt. They are often closely linked to powerful politicians.

As charities, the bonyads are supposed to provide social services to the poor and the needy, but because there are more than a hundred of these organizations, and governmental control is often lacking, it is unclear to whom and how they offer assistance. The financial and political power of the large bonyads makes it extremely difficult for private companies to compete.

For an in-depth overview of Iran’s energy sector, click on the button below.

A traditionally influential sector of economic and political power in Iran is the bazaar, which comprises traditional import-export merchants. Around the time of the 1979 Islamic Revolution, an estimated two-thirds of Iran’s wholesale trade and 30 percent of its import business was transacted through Tehran’s bazaar merchants. The bazaaris wield considerable political influence through their financial and political support of clerics. It is often said that the bazaar financed the Revolution.

In 2007 Iran’s estimated income from exports was USD 94.2 billion, 85 percent of which came from petroleum and natural gas. The estimated cost of imports in 2007 was USD 63.8 billion, yielding a trade surplus of USD 30.4 billion.

However, Iran’s export of crude oil and natural gas, a crucial lifeline, has been severely hit by international sanctions, forcing Iran to cut back on production. The European Union imposed an import, purchase and transport ban on Iranian crude oil in July 2012. In addition, European companies were banned from insuring Iranian oil shipments. The United States expanded its longstanding sanctions in November 2011 to target companies that aid Iran’s oil and petrochemical industries and banned the world’s banks from completing oil transactions with Iranian banks.

As a result, production of Iranian crude oil reached its lowest level since 1988 in September 2012, with 2.63 million barrels a day, down from 4.32 million barrels a day in 2011. In October 2012, the EU added a ban on construction of oil tankers for Iran and the flagging and classification of Iranian oil tankers and cargo vessels. Iran has consequently been forced to rely on a (remaining) small number of buyers of Iranian crude oil, like China and India, who have bypassed Western sanctions. The resulting loss of income has created further problems for the Iranian oil and gas industry that has already been suffering from under investment.

While Iran shares the world’s largest gas field with Qatar, it has a much lower production and export. Longstanding US sanctions have prevented Iran from developing export projects such as new pipelines and LNG facilities. The European Union imposed a ban on the export of equipment and technology to Iran, including technology for the refining of natural gas in 2011. Iran’s production of natural gas amounted to 212.79 billion cubic meters in 2015.

According to the International Monetary Fund (IMF), the total volume of export of goods has declined with an estimated 35 percent, compared to 2010. 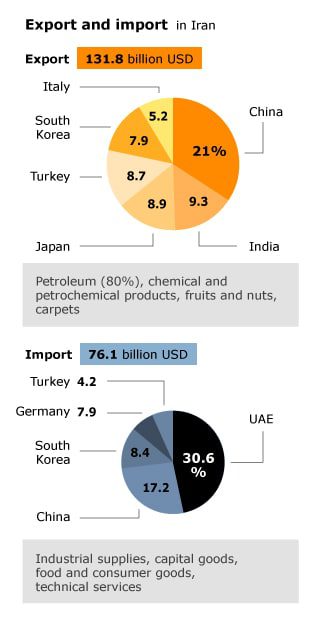 The volume of imports of goods has declined with an estimated 8 percent. Iran has seen a 8.08 percent decline in its oil production in 2013, compared to 2011.